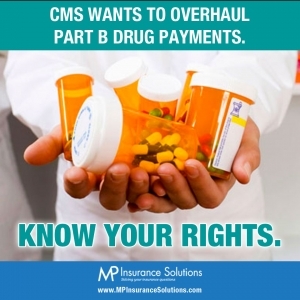 The Centers for Medicare & Medicaid Services (CMS) announced a proposed rule to test new models to improve how Medicare Part B pays for prescription drugs and supports physicians and other clinicians in delivering higher quality care.

The proposal is part of the Administration’s broader strategy to encourage better care, smarter spending, and healthier people by paying providers for what works, unlocking health care data, and finding new ways to coordinate and integrate care to improve quality.

CMS values public input and looks forward to continuing to work with stakeholders through the rulemaking process to maximize the value and learning from the proposed tests.

CMS is accepting comment on the proposed rule through May 9, 2016.

The proposed rule is available at https://www.federalregister.gov/public-inspection.

Prescription Drugs under Medicare Part B

Medicare Part B covers prescription drugs that are administered in a physician’s office or hospital outpatient department, such as cancer medications, injectables like antibiotics, or eye care treatments. Drugs paid under Medicare Part B generally fall into three categories:

Drugs furnished incident to a physician’s service in the office or hospital outpatient settings,
Drugs administered via a covered item of durable medical equipment, and
Other categories of drugs explicitly identified in the law.
The proposed Medicare Part B Model would test new ways to support physicians and other clinicians as they choose the drug that is right for their patients. It is designed to test different physician and patient incentives to do two things: drive the prescribing of the most effective drugs, and test new payment approaches to reward positive patient outcomes.

Today, Medicare Part B generally pays physicians and hospital outpatient departments the average sales price of a drug, plus a 6 percent add-on. The proposed model would test whether changing the add-on payment to 2.5 percent plus a flat fee payment of $16.80 per drug per day changes prescribing incentives and leads to improved quality and value. CMS would update the flat fee at the beginning of each year by the percentage increase in the consumer price index for medical care for the most recent 12-month period. This test would begin in late 2016 (no earlier than 60 days after the rule is finalized).

CMS expects that the add-on payment of 2.5 percent plus a flat $16.80 fee will cover the cost of any drug paid under Medicare Part B. The flat fee is calculated such that it is budget neutral in aggregate. CMS intends for the test to result in savings through changes in prescribers’ behavior.

Physicians often can choose among several drugs to treat a patient, and the current Medicare Part B drug payment methodology can penalize doctors for selecting lower-cost drugs, even when these drugs are as good or better for patients based on the evidence. To illustrate the effect of this change, consider two drugs each prescribed for a similar condition, with similar patient outcomes, but with widely varying prices. The average sales price for Drug A is $5, and for Drug B it’s $100. Today, Drug A is paid at $0.30 above the price of the drug and Drug B at $6.00. But under this proposal, Medicare would pay Drug A at $16.93 above the average sales price and Drug B at $19.30.

Commercial health plans, pharmacy benefit managers, hospitals, and other entities that manage health benefits and drug utilization successfully employ an array of tools including value-based pricing and feedback on prescribing patterns to improve the value of drug payments. To produce a menu of value-based purchasing options, CMS reviewed the numerous tools used by entities that manage drug and health benefits and identified those that may be applicable to payment for Part B drugs with the same positive results. These tests would begin no sooner than January 1, 2017.

The proposed value-based pricing strategies include:

Discounting or eliminating patient cost-sharing. Patients are often required to pay for a portion of their care through cost-sharing. This proposed test would decrease or eliminate cost sharing to improve beneficiaries’ access and appropriate use of effective drugs.
Feedback on prescribing patterns and online decision support tools. This proposed test would create evidence-based clinical decision support tools as a resource for providers and suppliers focused on safe and appropriate use for selected drugs and indications. Examples could include best practices in prescribing or information on a clinician’s prescribing patterns relative to geographic and national trends.
Indications-based pricing. This proposed test would vary the payment for a drug based on its clinical effectiveness for different indications. For example, a medication might be used to treat one condition with high levels of success but an unrelated condition with less effectiveness, or for a longer duration of time. The goal is to pay for what works for patients.
Reference pricing. This proposed model would test the practice of setting a standard payment rate—a benchmark—for a group of therapeutically similar drug products.
Risk-sharing agreements based on outcomes. This proposed test would allow CMS to enter into voluntary agreements with drug manufacturers to link patient outcomes with price adjustments.
Testing the Model to See What Works

CMS would conduct a complete evaluation of the proposed model, which would run for five years, with the goal of having the incentive and value-based purchasing tests fully operational during the last three years to evaluate changes and collect sufficient data.

As with other evaluations, the criteria for a successful model will be whether it reduces net Medicare spending, without limiting coverage or benefits, while maintaining or improving patient care. CMS plans to implement a concurrent real-time claims monitoring program to track utilization, spending, and prescribing patterns as well as changes in site of service delivery, mortality, hospital admissions, and several other high-level claims-based measures.

All providers and suppliers furnishing and billing for Part B drugs would be required to participate in the model, although not all would be part of each test, as described below. This would help ensure that observed outcomes do not suffer from selection bias inherent in a voluntary participation model and would help test whether the model can ultimately be generalized to providers and suppliers billing for Part B drugs with various characteristics, such as different geographies, patient populations, and specialty mix. With limited exceptions, CMS is proposing to include all Part B drugs and biologicals in this model.

Providers and suppliers would be placed in a control or study groups based on Primary Care Service Areas, which are clusters of zip codes based upon patterns of Medicare Part B primary care services (excluding the state of Maryland where hospital outpatient departments operate under an all-payer model) as follows –

No earlier than 60 days after the final rule is released to the public. CMS would begin to test the changes to Medicare Part B average sales price payments for drugs by creating a control group and a study group. One group would remain under the 6 percent add-on arrangement and the second would receive 2.5 percent of the average sales prices of a drug plus a flat $16.80 per drug per day payment.

This proposed model would not affect drug coverage or any other benefits, and beneficiaries will still have complete freedom of choice of doctors, hospitals, and other providers and suppliers.

Reinvent Yourself After Retirement

Medicare’s Annual Enrollment Period- AEP- What you need to Know